Chimamanda Ngozi Adichie is a Nigerian author and immigrant to the United States. Her work has been translated in over 30 languages. Her novel ‘Americanah’ is an immigrant tale and inspiration to many authors sharing similar subjects. In the picture, Adichie is visiting the Helsinki Book Fair in 2014. Picture: Tony Öhberg for Finland Today

In late October, about fifty participants from all over Finland attended a seminar  entitled “Today’s Literature, Tomorrow’s Literary History: Do Immigrant Authors Transform Finnish Literature?” The attendants at the Great Hall of the Finnish Literature Society SKS in the heart of Helsinki were mostly immigrant authors residing in Finland along with scholars, researchers and anyone engaged in literature produced by immigrant authors.

The event was a part of the project “Toward More Inclusive Finnish Literature,” conducted since January 2018 at the SKS.  The diverse programs not only provided the ground for all participants from different nationalities to engage in mind-provoking speeches, a multi-perspectival panel and an open discussion but also to enjoy listening to some poetry and prose readings by some authors and visiting a book fair exhibiting some of the published books by immigrant authors in Finland. The seminar also made room for attendees to share their thoughts, experience and suggestions for the future and discuss the changes that are recurring in Finnish literature due to immigration and globalization, multilingualism and multiculturalism.

While some authors wish to be known as “immigrant” authors, some others see this prefix a barrier on their way of integration, and accordingly, they avoid even touching upon immigration and immigrants’ issues in their works.

In his speech, Joop Wassenaar, a Dutch-Finnish author residing in Finland since 1994, reviewed some of the changes that have happened with regard to immigrant authors since his arrival in Finland. He described a seminar, organized for immigrant authors in 1995 in Turku as such: “One of the visitors was Heikki Luostarinen, professor of journalism at Tampere University. I remember his name because he was the only so-called ethnic Finn who was present. What a huge difference with today, as I have enjoyed the sound preparation of this event by the SKS and the other organizations backing up the SKS, as the audience counts many a scholar and journalist of full-Finnish descent.” Despite all positive changes, Wassenaar believed that further actions need to be taken with regard to immigrant authors so that he is no longer identified as an “outsider” after all.

Read also:  Award-Winning Author Jennifer Clement in an Interview With Finland Today: "I Have Finnish DNA"

But unlike Wassenaar, Dorothea Grünzweig, a German author living in Finland since 1989, noted that she has nothing against being an “outsider,” and even she stated that being an outsider is a necessary component for enriching her creative strength in her adopted home. However, “this is not to say that I don’t want to be seen, to be read, to be acknowledged and to be recognized as an author,” Grünzweig added.

As the project coordinator, who has already interviewed 15 immigrant authors in Finland, I have faced this controversy while interviewing authors. While some authors wish to be known as “immigrant” authors, some others see this prefix a barrier on their way of integration, and accordingly, they avoid even touching upon immigration and immigrants’ issues in their works.

In the panel debate, participants faced another controversy when Sirpa Kähkönen, the president of Suomen Kirjailijaliitto or the Finnish Writers’ Union, called the Finnish per se a “non-dominant” language despite its position as the official and majority language in Finland, and characterized it still as a rather marginalized, endangered and suppressed language throughout history.

She called the Finnish Writers’ Union a democratic body, major members of which are still reluctant to accept the membership of immigrant authors. Kähkönen then cleared it out that the Union is not ready yet to accept multilingual literature, produced by immigrant authors, as Finnish literature, calling on the immigrant authors to be patient and give time and generation change to do the job for them. Her position stirred some arguments not only among immigrant authors but also among Finnish scholars both in the seminar and in the social media. While listening to her words, I remembered Wassenaar’s question, asking in his speech: “How long will this melting take? At what point in the future I will no longer be an outsider? Will that be in ten or in fifteen years? Or never?”

Read also:  Award-Winning Author Jennifer Clement in an Interview With Finland Today: "I Have Finnish DNA"

Conducting this project and organizing such a seminar reveal that the work of the SKS is based on an up-to-date knowledge and understanding of the roots of the culture and the contemporary profile of a multicultural and multilingual Finland.

The SKS is a learned society and non-governmental organization that was founded in 1831 to promote Finnish language and literature, and it has been successful in its missions and activities. This is the first time that the SKS holds a seminar related to literature, produced by immigrant authors in Finland, and this is promising.

It is worth noting that approximately seventy immigrant authors from about thirty different nationalities reside in Finland. 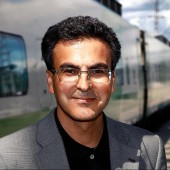 Mehdi Ghasemi received his Ph.D. from the English department at the University of Turku, and now he is a postdoctoral researcher at the Finnish Literature Society (SKS), University of Tampere and University of Turku. He is also a fiction writer and a reporter for Finland Today. He has published three fiction books.