The 2018 edition of the maternity package consists of colorful clothes. Picture: Kela

This year’s maternity package consists colorful clothes—a total of 64 different products. The selection of products included has stayed largely the same, according to the users’ wishes. New products introduced in this year’s edition include a customer favorite: leggings.

Maarit Sarin, mother of Luca, was the first to get her hands on the new products at Thursday’s photo shoot. Calling them “absolutely wonderful products.” She was especially fond of the duvet cover, the bodysuit and the overall.

According to Kela, the Social Insurance Institution and government agency responsible for releasing the maternity package, each edition of the maternity package goes through a painstaking development process which begins more than a year before the new edition is revealed to the public.  An advisory council with representatives from a range of organizations selects the products on the basis of submissions from prospective suppliers.

Each product must meet safety requirements imposed by Finnish and EU law. The products are tested carefully, and the quality of samples is checked. Most of the products are made outside Europe. 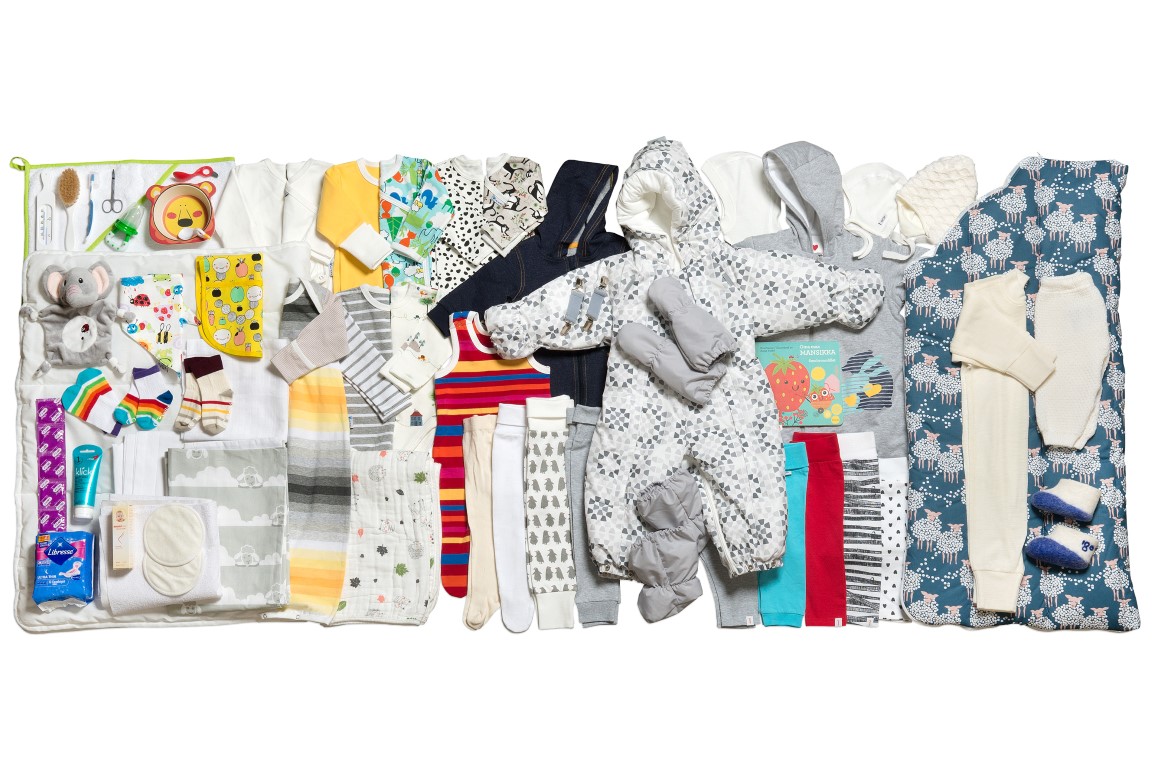 The contents of the package in 2018. Picture: Kela

According to Johanna Aholainen, a benefits manager at Kela, there have been calls to include more Finnish-made products. However, under the Act on Public Procurements and Concession Contracts, the products and manufacturers may not be selected on the basis of country or nationality.

The 2018 edition of the maternity package box features a design by Robert Lönnqvist, which shows a bear, a seal, an elephant, giraffe and a host of other colorful creatures.

The Act of Parliament establishing the maternity grant was passed in 1937, and the first maternity packages were distributed 80 years ago. The exact date of the changeover to a new edition varies slightly from year to year because any stocks remaining of the previous edition must be cleared out first. Distribution of the 2018 edition is estimated to begin in late May.

The monetary value of the newly added products is 30 euros, which is the amount by which the maternity grant will be increased starting April 2018.

The new maternity grant of 170 euros is available to beneficiaries whose due date is June 1 or later. There are no plans to add new items in the next few years. Instead, the higher monetary value will be used to further increase the quality of the items included in the maternity package.