Prime Minister Juha Sipilä is being observed while he is walking to the polling booth during the first day of the advance voting in Helsinki on March, 29, 2017. Picture: Tony Öhberg for Finland Today

Over the past week, Finland has been full of election talk and strong campaigning by the candidates, culminating in the election on Sunday. (Read our coverage of the results here.) However, many would not have noticed a quiet presence lingering in the shadows at polling booths across the country. Finnish authorities had invited a delegation from the Council of Europe to observe and advise how the election process can be improved.

Arriving in Finland in early April, delegates have spent five days overseeing the entire election process, making recommendations on improvements which could be undertaken to further enhance the election process. They divided into teams and observed 150 polling stations across Helsinki, Tampere, Vaasa, Joensuu, Oulu, Kuopio, Jyväskylä and Rovaniemi. Their findings were very positive. “Transparency was overall a positive feature of this election,” said Lelia Hunziker in an interview for Finland Today. She is the head of the delegation from the Congress of Local and Regional Authorities of the Council of Europe.

According to the delegation, there was a lot to like about the election. For example, all polling stations had a dedicated person to assist the voters and ample accessibility for disabled people at every station. They liked the quirkiness of the very first voter being given the opportunity to check the ballot box before the box is sealed. Early voting being allowed over the preceding week was a winner and highly utilized with about 40 percent of the electorate voting before election day.

As part of this, mobile polling stations were made available by appointment the week prior to the election. With these features enabling constituents to vote within a flexible time frame, voter turnout was high at 58.8 percent. The delegation considered the counting process efficient with polling booths closing at 20:00 in the evening and all votes counted by 03:00 on Monday morning (Even though Finns thought this was considerably slow.)

[alert type=white ]They liked the quirkiness of the very first voter being given the opportunity to check the ballot box before the box is sealed.[/alert] 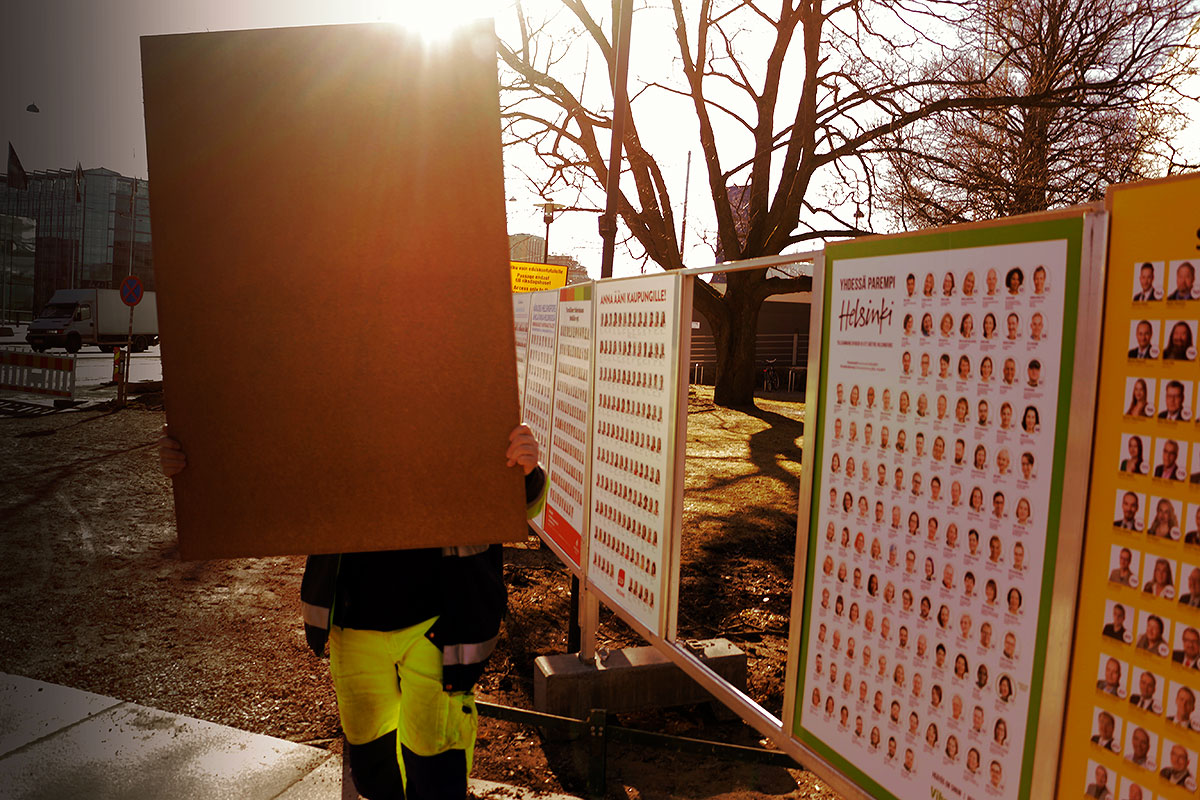 An election poster is being removed to make room for a new one in Helsinki on March 29, 2017. Picture: Tony Öhberg for Finland Today

However, it wasn’t all positive feedback. The delegation was concerned with the lack of continuity between polling stations. They were concerned at irregularities in the sealing of the ballot boxes. Some were partially sealed and some locked with a key kept at the desk. Also, even though all people manning the polling stations had some level of training, “a short, compulsory and systematic training for members of the polling station could be of help.”  Also mentioned was the need to make it easier for independent candidates to run for the council.

[alert type=yellow]They were concerned at irregularities in the sealing of the ballot boxes.[/alert]

It was mentioned that officials were disappointed in the low percentage of “new Finns” participating in the election. Approximately 19 percent of new immigrants voted in this election. This could be due to a lack of exposure or knowledge of the somewhat daunting task, choosing a candidate.

According to the delegation, a consistent concern being raised amongst the municipalities was regional administrative reform. Finns are wanting reform, improving access to health and social services for the population everywhere in Finland. Hunziker’s concerned “regions will be given new responsibilities without the financial autonomy resulting in a decentralization of centrally allocated funds. Most important is the citizens need to be involved.”

Overall, according to Hunziker, the election was organized in a “highly professional manner and procedures were in line with European standard for fair, free and transparent election.”

Congress of Local and Regional Authorities of the Council of Europe is an institution of the Council of Europe in Strasburg. It is responsible for strengthening local and regional democracy in the 47 member countries across Europe. This council is a leading human rights organization and is comprised of countries both internal and external of the EU.

The delegation amalgamated a wealth of experience and knowledge comprising of 24 members from 18 countries. Each member is an experienced council campaigner in their own country.