President Niinistö arriving in Arkhangelsk in Russia to attend the International Arctic Forum on 30 March 2017 Picture: Katri Makkonen/Office of the President of the Republic of Finland

It is fitting that we are meeting here in Arkhangelsk, a historical meeting place between the East and West. I approach the event in this spirit: Promoting a meeting of minds with a firm belief that the Arctic will indeed remain a “Territory of Dialogue,” said President Niinistö during his opening remarks at “The Arctic: Territory of Dialogue” forum in Arkhangelsk in North Russia. “My starting point today is the growing threat of climate change. Tackling this challenge is crucial if we want to ensure that the Arctic remains the place it is today. But the issue is of global significance: If we lose the Arctic, we lose the whole world.”

Niinistö continued saying that “global warming is a well-documented fact.” “Last year was the warmest year ever in the history of monitoring the Earth’s temperature – and already the third record-warm year in a row.”

Receive our free newsletter related to the latest in Finnish politics.

You are now a step closer in keeping up with the Finnish politics.

“No one can escape the effects of global warming. At the moment, the problem is most acute in the North. The former UN General Secretary Ban Ki-moon has called the Arctic “the Ground Zero for climate change.” The average temperature has risen twice as fast in the Arctic as in most other regions. The summer ice cover reached an all-time low in 2016 and recent reports indicate that this winter has not fully rectified the situation.”

According to Niinistö, a further concern is the recent report made by Russian scientists that in Siberia there are some 7,000 methane-filled pockets waiting to release their content. “This will create danger and disruption to infrastructure and humans in the area. What is worse, once released, methane is a much more potent greenhouse gas than carbon dioxide,” Niinistö said and continued. “Eventually a warming climate will cause major challenges to everyone on this planet. In the Arctic, residents are facing immediate consequences that will fundamentally impact their communities and traditional livelihoods. Food security is threatened and new health concerns are emerging.” 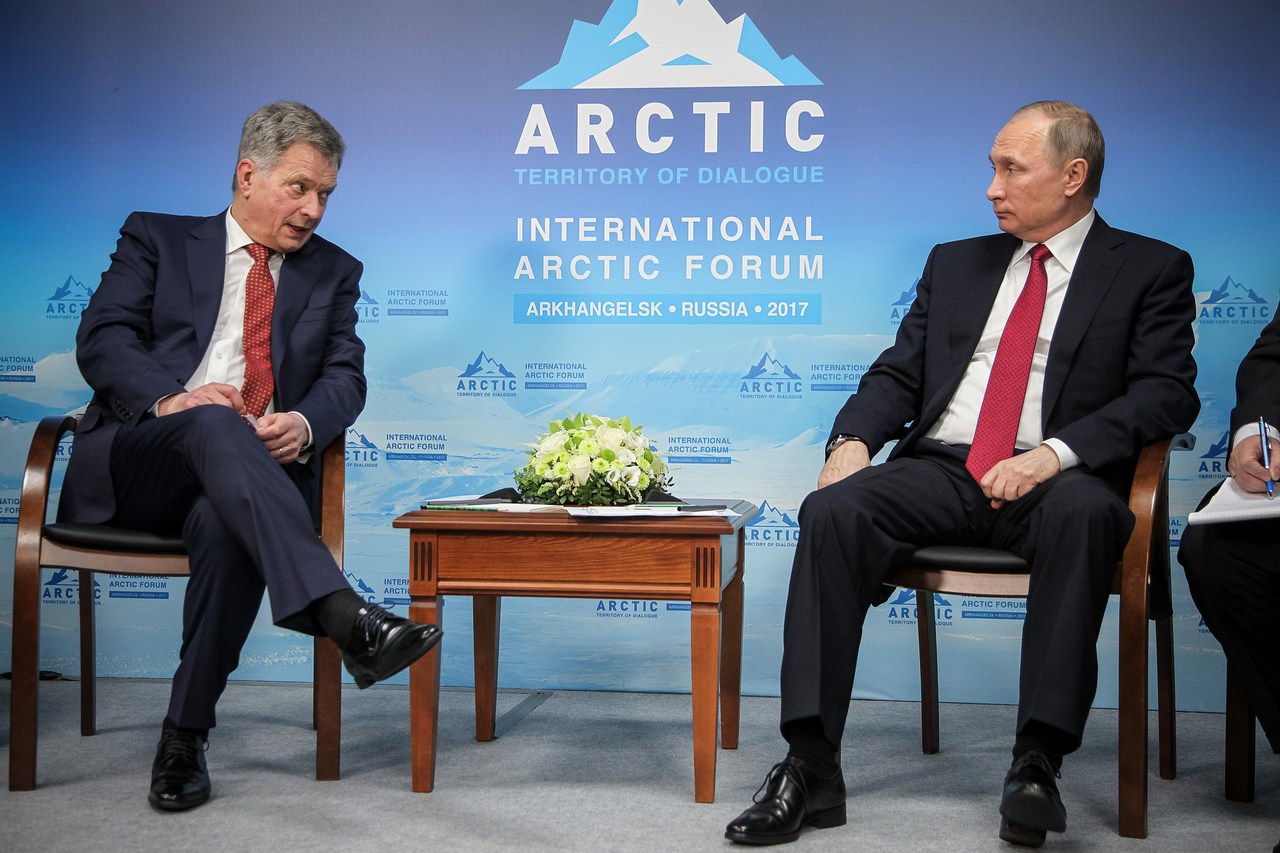 President Niinistö and President Putin meeting at the International Arctic Forum in Arkhangelsk in Russia on 30 March 2017. Picture: Katri Makkonen/Office of the President of the Republic of Finland

Niinistö reminded the listeners that climate change is also a major security issue: It is a threat multiplier that aggravates many issues behind conflicts: famine, water scarcity, flooding, forced displacement and so forth.

To combat climate change, the first, major step has, according to Niinistö, already been taken: It was the conclusion and early ratification of the Paris Agreement on climate change. “But the most important part – effective implementation – lies still ahead of us.” “Secondly, we need intensified co-operation across the borders to combat the challenges and to strengthen the resilience of Arctic residents.”

Read also:  President Niinistö: The Relations Between Finland and the U.S. Are Closer Than Ever

Thirdly, Niinistö said that in order to be effective, Arctic cooperation must have a global dimension. A case in point is the impact of black carbon on climate, environment and human health. The sources of black carbon are known, technology and know-how to deal with the problem exist. It is time we dealt effectively with it.

One source of black carbon is flaring, that is burning excess gas at the production site. For a layman that is almost impossible to understand. In 2015 flaring amounted to almost 150 billion cubic meters of wasted gas. “To put this into a perspective: this is almost 40 times as much as Finland uses natural gas annually. This amounts to burning money. On top of this, flaring accounts for a quarter of the climate warming in the Arctic,” Niinistö said.

Fourthly, we must ensure that the Arctic remains an area of co-operation. The strategic importance of the Arctic is growing. The geopolitical tensions in other parts of the world should not be allowed to spill over to the Arctic. “Cool heads are needed to keep the Arctic an area of low tensions also in the future.”

“Finally, we must ensure that the mechanisms we already have reached their full potential. Beginning in May Finland will chair the Arctic Council for two years. Our chairmanship slogan will be “Exploring Common Solutions”. We want to highlight the need for constructive cooperation between all Arctic stakeholders. Also, we believe it is time to take the Arctic cooperation to a new level. Finland proposes the convening of an Arctic Summit to discuss a wide range of issues pertaining to the region and beyond. This would provide an opportunity to ensure that the Arctic indeed remains a territory of dialogue. It is our common responsibility to see that this promise and tradition is upheld in the North.”

Read also:  President Niinistö: Finland Is Safe, Peaceful and Developed - However, There Are Some Problems

Source: Office of the President of the Republic of Finland