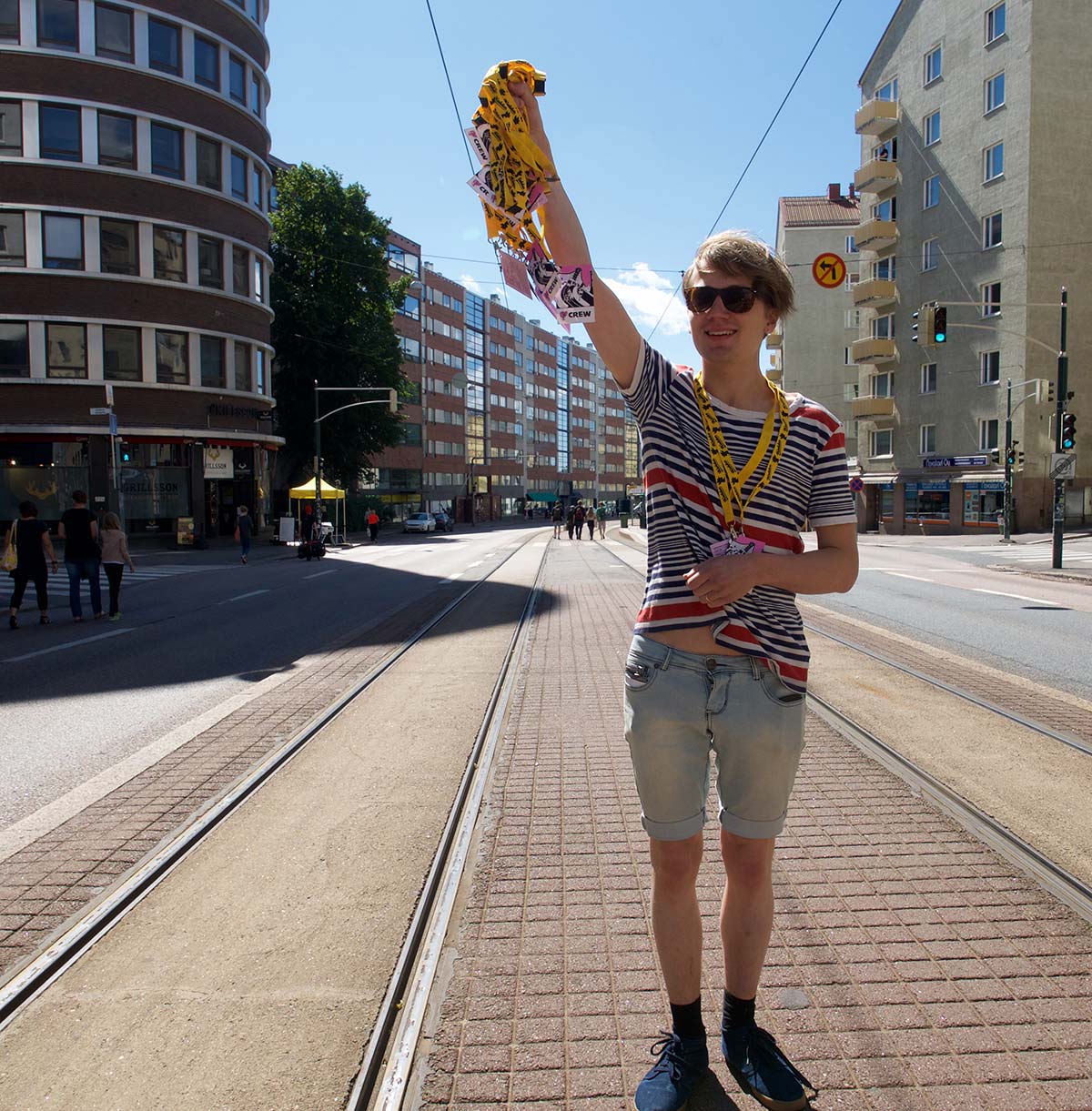 Santeri Palkivaara is a freelance singer-songwriter/musician currently living in Helsinki. He’s also studying pop/jazz composition at Metropolia, university of applied sciences. His main project at the moment is solo work under the pseudonym Alec Danger, and his music and videos can be found here. He volunteered at Kallio Block Party this year, and kindly spoke about the experience recently.

You were the stage manager for Synalava at Kallio block party? How did you get involved?
Basically by accident, it happened round the time when I was recovering from an extremely heavy break-up. I was wanting to meet new people and get something else to think about. Kallio-liike answered with a warm welcome.

Was this your first time working with Kallio-liike in the block party event?
No, the second. I produced one stage last year, it was called “Chillax park”.

How did you find out about Kallio-liike?
I must have read from facebook about it. Also a few of my friends were involved already.

In the lead up to the Block Party, were the organisational requirements demanding? When did they start preparing with you?
Right before the dust of the last years’ event had been settled. I remember the planning been on for at least half a year before the festival day.

Were you impressed with the organisation of the festival? Would you stage manage or volunteer again?
I’m impressed every time Finnish people are ready to do something without a monetary advantage and for the pleasure of others. I think I will remain in some kind of contact with Kallio-liike, but I can’t promise anything yet. Depends on how the event is going to be organised next year. In my book, Block Party has grown out of its frame and that’s why it needs to change at least partially. Maybe towards into a more regular, commercial event. I take no opinion on whether that’s a good direction for it or not.

READ:  I Went to the Pori Jazz Festival to Find Out Why It's Considered Legendary

Do you think that Helsinki supports these kind of events, and has enough of them?
Yes it surprisingly does. Also this year we got a grant from the town. There’s never enough of free events where people can be themselves, not anywhere in the world.

Given the ideals of Kallio-liike, do you think the Block Party is a good representation of their community focus, and does it provide a warming image of Helsinki’s citizens?
Yes, to me it is a strong representation but also a statement. We can stop the traffic of one of the busiest streets of town for one day to create an alternative reality, a free festival for anybody to enjoy. Kallio Block Party definitely shows the many faces of the multicultural contemporary Helsinki.

Do you have any hopes for these kind of events in the future?
I hope that people would litter less, because the organizers will be the ones to pick up the trash after their funny and cheap night. But all in all I have to say that I’m pretty proud of the way people behaved at the festival.

A reporter and photojournalist specialized in culture and the decisive moment.