GALLERY: National Parade on the Flag Day of the Finnish Defence Forces Attracted a Large Crowd in Helsinki 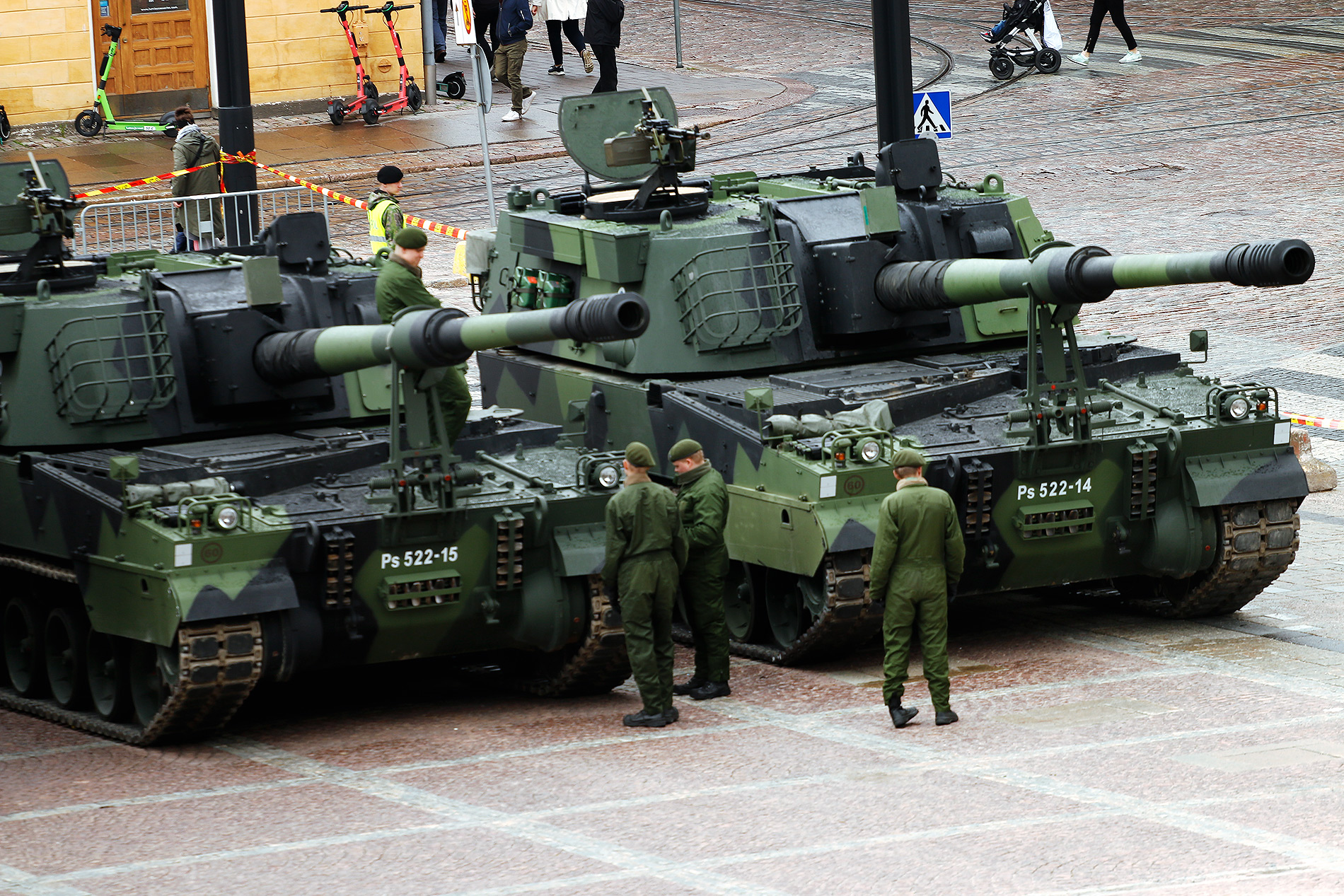 Army vehicles parked on the Senate Square in Helsinki before the beginning of the review of troops on June 4, 2022. Photographs: TONY ÖHBERG/FINLAND TODAY / Click to view the gallery.

The national parade on the Flag Day of the Finnish Defence Forces takes over the streets in Helsinki on Saturday.

Along with the review of troops and pass-in review, the program also includes an equipment display, and the Finnish Defence Forces’ summer tour concert, and more.

Themed “Readiness at all times—Finnish Defence Forces as a safeguard for Finland,” the parade will be participated by units from the Army, Navy, and Air Force, National Defence University, Finnish Border Guard, as well as representatives from national veterans’ and national defence associations.

Altogether, the parade will be attended by up to more than 1,600 personnel, over 40 vehicles and 15 aircraft, as well as an inter-agency canine detachment.

The parade will be reviewed by President Sauli Niinistö accompanied by General Timo Kivinen, who is the commander of the Finnish Defence Forces.

Read more about the highlights of the day below.

Pass in Review on Mannerheimintie

The pass in review conducted on Mannerheimintie will start at 13:30.

After the review of troops, the dismounted marching detachments will move from the Senate Square to Unioninkatu to Aleksanterinkatu and to Mannerheimintie to the start point of the pass in review at the intersection of Simonkatu and Kaivokatu. Prior to the pass in review, the vehicles part of the review of troops will follow the dismounted marching detachments to Aleksanterinkatu.

The parade event will also include, for the first time, a new pre-series armored 6×6 personnel carrier procured for the army.

The flypasts of the pass-in-review will feature Finnish Army NH90 transport helicopters and Hughes MD500 light helicopters, as well as FAF F/A-18 Hornet multirole fighters and Hawk jet trainers, and the Finnish Border Guard Super Puma helicopter. The flypasts will cause noise over the area of Helsinki city centre.

The parade troops will be commanded by Commander of the Army, Lieutenant General Pasi Välimäki.

Vessels on display at South Harbor

At South Harbour, Finnish Navy vessels as well as vessel and boat equipment by other agencies will be available for familiarisation between 10–19.

The Navy vessels on display will be Fast Attack Craft Hamina and Minelayer Porkkala. Equipment will also be on display by the Police, Finnish Border Guard, and Helsinki Rescue Department.

At Kansalaistori Square, the day will culminate in the Finnish Defence Forces’ summer tour concert featuring the Air Force Big Band with Heikki Silvennoinen as the soloist, and the Guard’s Combo with Souls of Women as the soloist. The trio by Emilia Vihanto, Iina Mutikainen and Klaara Koivunen will bring on stage a multi-faceted show ranging from the classics of soul to rock and pop music hits.

The night will end with the Conscript Band of the Finnish Defence Forces’ Showband. The 20-conscript-strong band’s skill is in rock classics and groovy funks, as well as in contemporary pop music and rap hits.