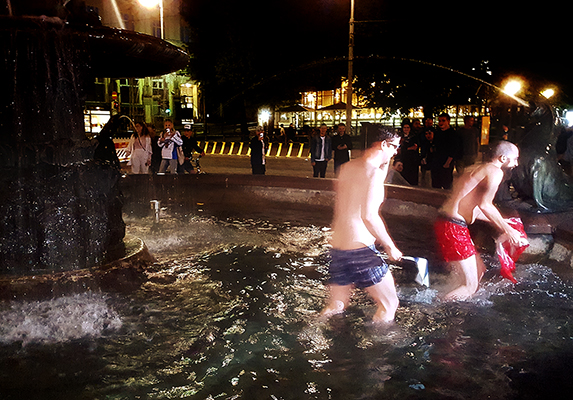 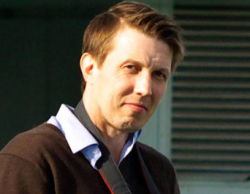 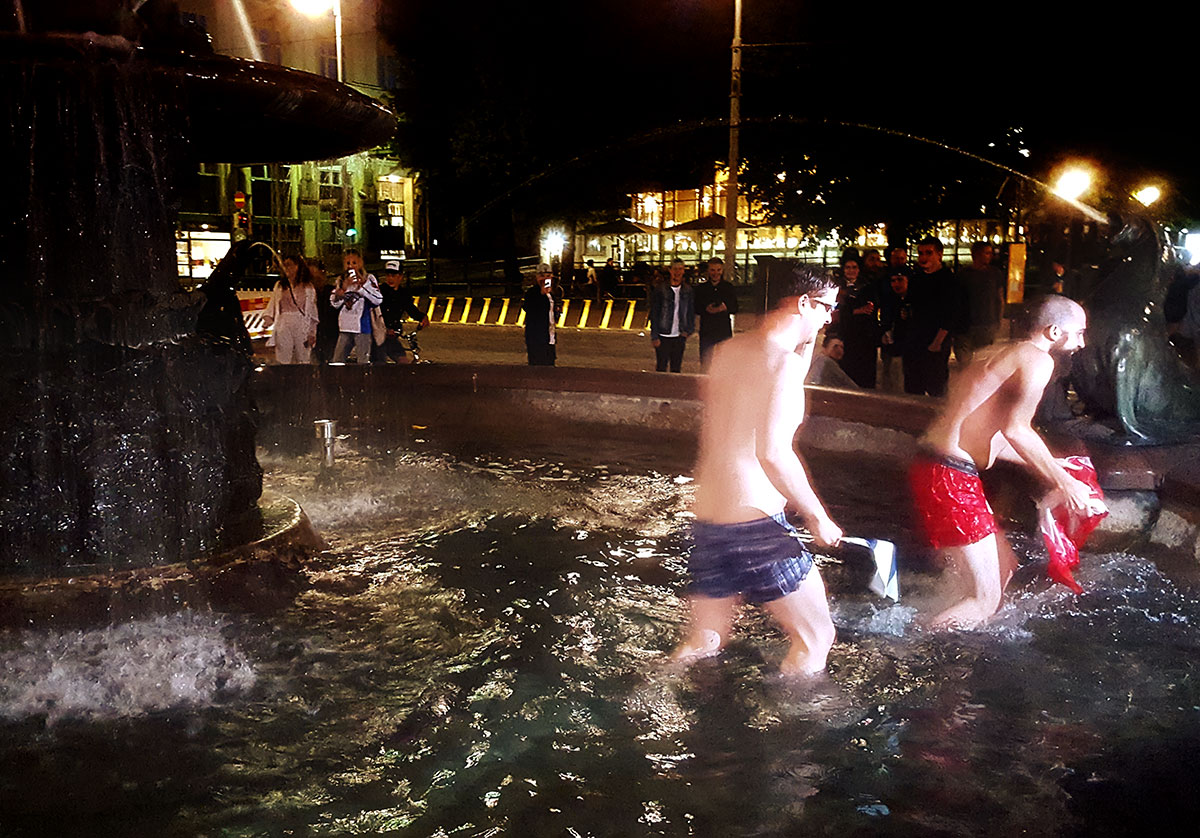 Jarkko and Gary swimming in the fountain of Havis Amanda in Helsinki, Finland after Canada won the Ice Hockey World Championships in Moscow on Sunday May 22 2016. – Finland Today

I couldn’t sleep after the intensive Ice Hockey World Championships gold medal game, which Finland lost 2-0 against Canada on Sunday night, so I took a stroll in the Helsinki center to relax my mind.

At the railway station there were people dressed in national hockey shirts hanging their heads half-drunk, eating junk food. Others were cursing in front of the Sports Academy sports bar, which on Saturday had been the stage for a serious bacchanal after the Lions beat Russia 3-1.

In front of a nightclub next door, a man was furiously arguing with the bouncer. I left before the troublemaker would be carried away in handcuffs. Next to Stockmann, a group of ladies dragging the national flag in their hands came across a cheerful group, who were hoisting the flag sky-high.

“What the hell!” exclaimed one of the girls with a sad face.

“There’s no shame in silver,” said the girl waving the flag.

I heard another group chanting a bombastic melody from the direction of Havis Amanda, the statue, the fountain and the historical stage for the drunken madness when Finland wins a world title in ice hockey. In 2011, when Finland beat Sweden, people not only swam in the pond but also climbed everywhere they could with bare hands.

A few guys climbed on top of the Presidential Palace and took a piss on the roof.

In the middle of the Northern Esplanade, there was a group of Canadians singing their national anthem.

A furious-looking Finn cut through the group and uttered “Go to hell!”

Havis Amanda was surrounded with excavators and a strong smell of blacktop hugged a crowd of about 50 people with Canadian roots. While the workmen poured blacktop in the open wound of the Esplanade, a tall and a shorter guy jumped into the fountain in their underpants. The shorter one was waving the Canadian flag and the other the national one respectively.

After a quick dip, the shorter guy introduced himself as Gary, 28. Jarkko, 24, held an arm around his shoulder. It turned out they were roommates from Matinkylä, Espoo. Gary had moved to Finland from Canada in 2013. He said the game was intense and “could have gone either way.” I agreed. “But the game, Finland against Russia, was really good.” I nodded.

Laura, 27, interrupted our discussion, introduced herself as their third roommate, and said that “Gary would have done the same for us if Finland had won!” “He would have swum at the feet of Havis Amanda with the other Finns!” 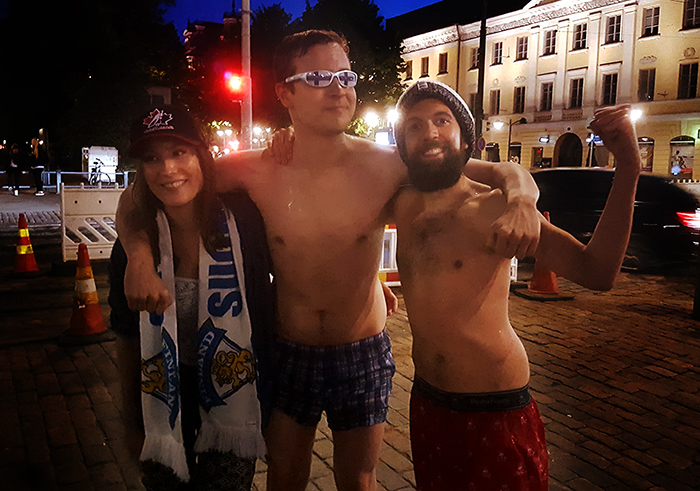 I started my stroll to the nearest pub, to write the story. I came across yet another group of sad-looking guys. The other was hanging the Finnish flag over his shoulders and he was talking to another man in regular clothes, holding a can of beer and swaying on his heels.

“There is no shame in silver,” said the man with the beer can and continued, “We lost against the country who invented ice hockey.”

The guy with the flag stood and stared quietly.