A Girl With the Finnish Fever

Somewhere in the deep woodlands of Finland. Picture: Anna Viljanen for Finland Today

No good story ever started with drinking tea. My story started with the rhythmic sounds of folk metal music coming from my electric guitar amplifier. Once upon a time, in a land far far away (no, not Russia, not THAT far away, a little bit closer to the west), in Poland, there lived a girl who led a completely ordinary life. These were the times of innocence, brotherhood, cheating on tests and eating a lot – a typical life of a teen in junior high school. Times like never before and never later. But her life became extraordinary when she met a group of lively, joyful headbangers, who offered her a reputable position as a rhythm guitarist in their power metal band.

In Poland, they have a name for people like me – they say we have the Finnish Fever. It’s an interesting kind of disease – spread through contact with an infected individual. My Finnish godfather and master in the first months of being a student was Gregory The Headbanger First. Tall as a tree, head over hills in love with music. He was a front man of our music band, a man who considered Jarkko Ahola, the vocalist of the Finnish power metal band Teräsbetoni, to be the first world’s greatest miracle and his own cat as the second. It makes only sense that the music of our band was based on a fusion of Teräsbetoni and Turisas, which was another Finnish power metal band, but bending toward folk. Anyway, cover songs were our daily bread.

READ:  The Calling of the Trees

[alert type=green ]In Poland, they have a name for people like me – they say we have the Finnish Fever. It’s an interesting kind of disease – spread through contact with an infected individual. [/alert]

The day of initiation finally came. My own rite of passage. Our vocalist got sick and I had to replace him behind the microphone on one of the rehearsals. “Huominen tulla jo saa” forced me to murder Finnish with my tongue. I was, after all, using the crispy, buzzing Polish as my everyday tool of communication. A few words for the sake of explanation: the Finnish language is such a complicated subject that it deserves its own column or two. Perhaps a hundred. Or even a thesis.

To me, Finnish sounds soft and rugged at the same time. Silky, low, tough, rocking with all those “si” and “nen.” Not nervous and fast like Spanish, not rough like shouting German, not made of gum like English. Finnish sounds like it was created to say something important in an emphatic and resolute manner. It sounds like it was created to sing about the fallen heroes on a cold night. But let’s get back to the story.

I came up to the microphone with a face as pale as the white razor. “Tunnen, tuulet, tuonelan . . . ,” I sang to myself trying to focus. “Thank God that no Finn hears me right now, he would die laughing.” Guitar, percussion and . . . and suddenly Finnish just flew through my mouth as if it was always there. I loved the sound of it.

That’s how Finland became part of me until the death will tear us apart. Learning the language appeared to be a goal harder to achieve than I could have ever imagined. But it didn’t stop me from learning more words and song lyrics by heart. Just for myself. Just for that SOUND! Be sorry that you cannot hear this, Finns!

READ:  Five Reasons to Book your Holiday in Finland

That was the remote past when I was sure that Finland is a mix of forests, steel and men’s choirs, that every Finn looks like Alexander Skarsgård in his thirties and that Santa Claus exists and lives in Lapland. I was afraid that confronting my expectations with reality might be painful, but to be sure I decided to check it myself. What did I see, when I finally set my foot on Finnish land? What swept me off my feet and what came as no surprise? How does Finland look through Polish geek’s eyes? More about that in my next column. 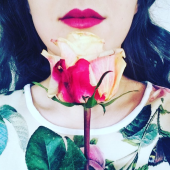 I am a Polish journalist – freelancer, blogger and columnist. I've published in Polish newspapers and portals such as Label Magazine, Pen Show Poland, Gość Niedzielny and Culture Enter. I'm also running my own blog Inkoholiczka. Viljanen is a writing pseudonym that came from a fascination with Finland's music, language and culture.